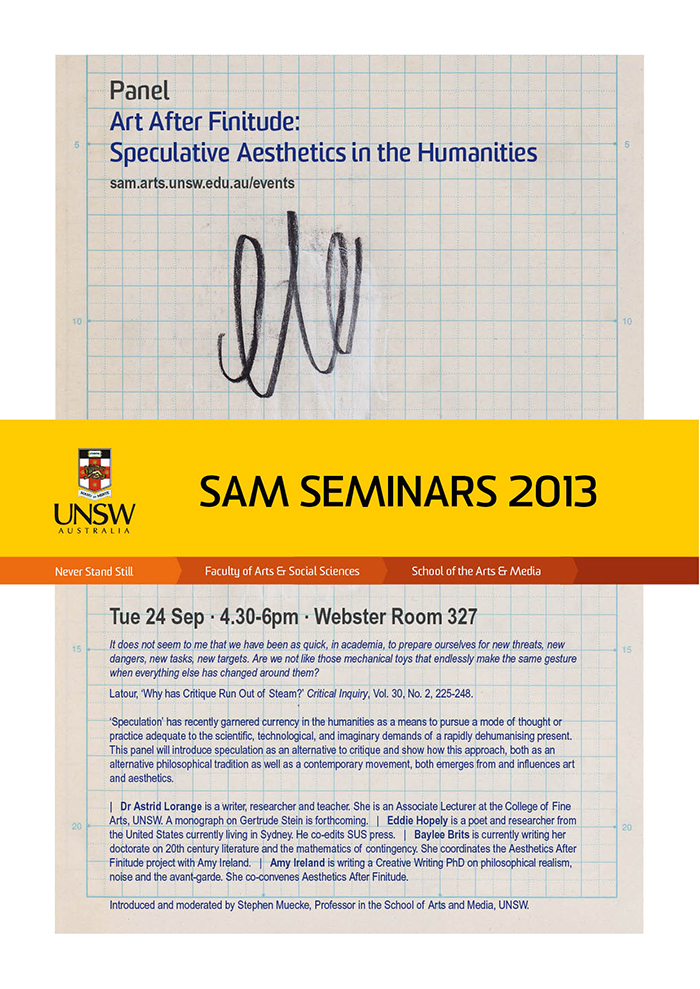 Art After Finitude: Speculative Aesthetics in the Humanities

‘It does not seem to me that we have been as quick, in academia, to prepare ourselves for new threats, new dangers, new tasks, new targets. Are we not like those mechanical toys that endlessly make the same gesture when everything else has changed around them? It has been a long time since intellectuals were in the vanguard. Indeed it has been a long time since the very notion of the avant-garde passed away, pushed aside by other forces, moved to the rear guard, or maybe lumped with the baggage train.’

'Speculation' has recently garnered currency in the humanities as a means by which to pursue an avant-garde mode of thought or practice adequate to the scientific, technological, and imaginary demands of a rapidly dehumanising present. This panel will introduce speculation as an alternative to critique and show how this approach, both as an alternative philosophical tradition as well as a contemporary movement, both emerges out of and influences art and aesthetics. What kind of artistic and literary practices might constitute speculative work? How might the non-philosophical take up that which is strictly unthinkable for philosophy? Can concepts such as ambience and paratextuality problematise identity and critical address? How does speculative thought understand time? And what kind of mark does the experience of the non-human leave upon the human?

Through the interrogation of specific modernist and postmodernist literary works that address or transform the possibility of an absolute, the limits of consciousness, the material consequences of signification, or 'the necessity of contingency,' we will attempt to develop a set possibilities for a speculative aesthetics, and in so doing, gesture towards a vision of the humanities that no longer relegates its avant-gardes to the ‘baggage train’.
Presenters

Dr Astrid Lorange is a writer, researcher and teacher. She is an Associate Lecturer at the College of Fine Arts, UNSW. A monograph on Gertrude Stein is forthcoming.

Eddie Hopely is a poet and researcher from the United States currently living in Sydney. He co-edits SUS press.

Baylee Brits is currently writing her doctorate on 20th century literature and the mathematics of contingency. She coordinates the Aesthetics After Finitude project with Amy Ireland.

Amy Ireland is writing a Creative Writing PhD on philosophical realism, noise and the avant-garde. She co-convenes Aesthetics After Finitude and makes experimental poems that you can throw.

Introduced and moderated by Stephen Muecke, Professor in the School of the Arts and Media and author of Contingency in Madagascar (Intellect: 2012) with photographer Max Pam.

The panel is open to the public and will be held on Tuesday, 24th September, 2013 from 4:30 pm - 6 pm in Robert Webster 327, UNSW as part of the School of the Arts and Media's regular seminar series: https://sam.arts.unsw.edu.au/events/sam-seminar-14/
Posted by AestheticsAfterFinitude
Email ThisBlogThis!Share to TwitterShare to FacebookShare to Pinterest